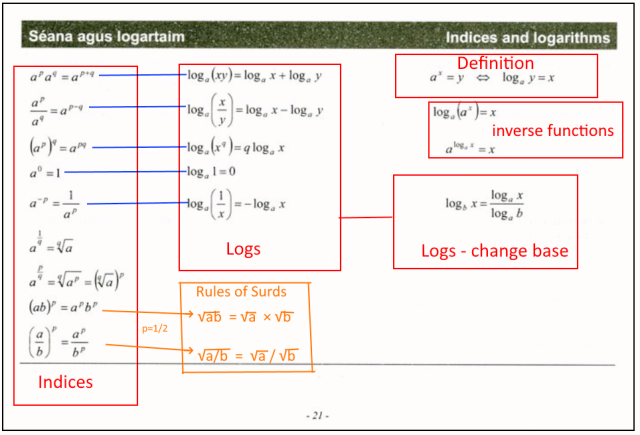 The information on page 21 of the Formulae and Tables booklet (Indices and logarithms) can be divided into a number of distinct sections as shown by the red boxes above. Indices and logarithms are different ways of looking at the same thing. The key to the whole thing is the expression in the section in the box called “definition” above.

2 is called the base,

3 is called the index or exponent,

8 is called the value of the power.

The above example is read as 2 raised to the power of 3 is 8.

Note that the power consists of two parts; a base and an index. To be correct about it, index is not another word for power, but in practice the word power is often incorrectly used instead of index. Indices is the pleural of index.

These laws of indices give the rules for dividing and multiplying numbers written in index form.

These properties only hold when the same number is being raised to a certain power. For example, we cannot easily work out what 2³×5² is, whereas we can simplify 3²×3³

Log is used as a short form of logarithm, and is another name for index. All logs must be in the same base in applying the rules and solving for values. If this is not the case at the start of a problem to be solved then use the law of logs in the red box labelled “Change base” in the picture above. There are two bases commonly used. If working with base 10 it can be written as log10 or log. If no base is specified it is assumed to be base 10 as this is the base we normally work in in our everyday life. The other common base is the base e, (where e, also called Euler’s number, is approximately 2.718281…). Logs to the base e are called Natural Logarithms and are written as logex or ln x.

Note the similarity between the laws of indices on the left and the corresponding laws of logs connected above by the blue lines.

In exponential format we start with a base and we multiply it by itself for certain number of times to reach to a target.

In Logarithms, we start with a base and a target and find out how many number of times, base has to be multiplied by itself to reach the target.

Logarithms are only defined for positive numbers. We can not get the log of zero or of a negative number. Try it on your calculator and it will return a syntax error.

It’s much easier to relate to addition, subtraction, multiplication, and division….and in fact to some extent, even to exponentiation (think about population growth or COVID-19 infection spread). But why would someone care to compute the logarithm of a number? The simple answer is: Logarithm of a number gives a measurement of how “big” that number is in comparison to another number.

The human mind is capable of processing and comparing numbers that are on the same scale or similar scale. e.g let’s say you are given the weights of different people(adults) of a group. Probably, everyone falls in the range of 40Kgs to 200 Kgs. We can visualize and compare these numbers with ease.

Now consider, you have been given the volumes of all heavenly bodies in our Solar System. Roughly, these numbers are as follows:

Let’s try to compare the sizes using a bar graph:

The graph above exposes the problem. The size of Sun is so big that we can’t comprehend other values. Everything else looks the same when compared to Sun. The only factual thing we can deduce is that Sun is extremely big but this is something that everyone knows!

What if, we take the “logarithm” of the values on Y-axis (i.e Volumes) and check the graph:

This gives a more clear picture where we can compare the sizes even when the value of sizes differ a lot from each other. Notice the Y-axis. Every bar represents the logarithm of the actual size. (Note, we are using base 10). You can now get some interesting facts like:

So Logarithms provide the “scale”. They make it much easier to comprehend and compare very large numbers.

Logs allow us to translate a multiplicative (a.k.a. compounding) sequence into an additive one. Besides making graphs of exponential data easier to interpret, this has another really useful application — linear regression. One of the requirements of linear regression is that the relationship between the dependent variable and the independent variable must be a linear one.

If the chart on the left above was of some raw data that produced an exponential curve, that on the right would be the result obtained if graphing the same data on a logarithmic scale. It is approximately linear and so we could use linear regression techniques and software to analyse it. If the original data gave a perfectly exponential curve then using the logarithmic scale would give a perfect straight line.

Click here for semi-log paper template which you can print.

When we work with numbers in index form we generally prefer the index to be a whole number. We don’t like things like x = 1016.84719. To put this in a more acceptable format we enter the index 16.84719 into our calculator and use the second function or shift key and then antilog to get an equivalent value for x with the 16.84719 changed to a whole number. Of course if the index changes then the base number (10 in our example) must also change for the overall value of x to remain the same. When we do this the calculator returns 7.03 x 1016 to three decimal places. 1016.84719 is the same as 7.03 x 1016.

In this example remove fractions by multiplying across by denominators.

No need for too many decimal places, but because we are using an approximate value instead of an exact value we use the curvy approximately ~ sign instead of the = equals to sign.