Calculus as we know it today was developed in the later half of the seventeenth century by two mathematicians, Gottfried Leibniz and Isaac Newton. There are two main branches of calculus: Differential Calculus and Integral Calculus. Differential calculus determines the rate of change of a quantity, integral calculus finds the quantity where the rate of change is known. “Functions” are defined by a formula.

The mathematics of limits underlies all of calculus. Limits enable you to zoom in on the graph of a curve — further and further — until it (for practical purposes) becomes straight. Once it’s straight, you can analyse the curve with regular-old algebra and geometry.

The dy/dx means instantaneous change in y divided by instantaneous change in x. The Slope of a line or curve is measured by change in y divided by change in x. So between two points on a curve, the y-value of the second minus the y -value of the first, all divided by the x-value of the second divided by the x-value of the first, will give you the slope of the straight line between those two points. But we want the slope at a point, which poses some problems. How can there be any change at one point? Well, there can’t, really, but what we can do is find the change between two points which are closer to one another than any finite distance. We can determine through algebra that as you make the distance between them smaller and smaller, the change in y over change in x gets closer and closer to some definite ratio, which is the “limit” as the distance between them “approaches” but never actually reaches zero. Thus, the “dy/dx” is that ratio at an infinitely small distance, thereby effectively being the slope at one point

If you are asked to find the derivative by first principles then you use this theory to work it out. Otherwise we accept that someone has already figured out how to do differentiation and have developed rules or formulae to get the required answer. This is called doing differentiation by rule and we use the product, quotient or chain rule as required depending on the “shape” of the equation we are working on.

Gradient of a Curve 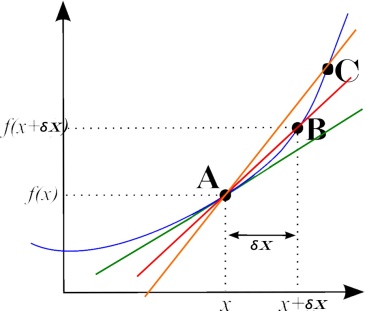 An approximation to the gradient at any point can be found by drawing a chord. A chord joins together two points on a curve. The closer together these two points are, the closer one gets to the actual gradient of the graph at the point in question.

We can use algebra to find out what the gradient of this tangent will be.

This is denoted by dy/dx (“dee y by dee x”). dy/dx is known as the derivative of y with respect to x.